Shield Talk: Panthers for sale in the midst of Richardson investigation 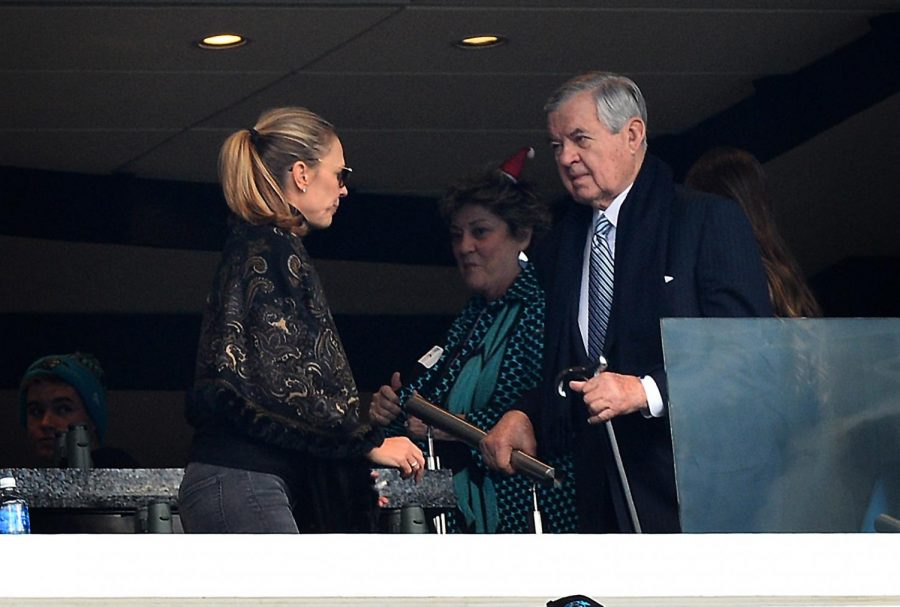 Carolina Panthers team owner Jerry Richardson, right, arrives in the owner's box at Bank of America Stadium on Sunday, Dec. 17, 2017 prior to the team's game against the Green Bay Packers.

Several months ago, Hollywood producer Harvey Weinstein was publicly accused by multiple women of sexual misconduct. Since then, individuals from all trades and industries have been accused of sexual assault and misconduct as part of the #MeToo campaign.

The National Football League was not immune to this movement.

Carolina Panthers owner and founder Jerry Richardson was recently accused of making inappropriate sexual remarks and actions as well as using a racial slur, according to a Sports Illustrated report.

Sports Illustrated reported that at least four former Panthers’ employees have received “significant” settlements, along with non-disclosure agreements, in regard to inappropriate comments and actions taking place around the office. The Panthers organization has started an internal investigation, but the investigation has since been taken over by the NFL.

On the same day that the report came out, Richardson released a statement announcing that he will be selling the Panthers franchise.

“I believe that it is time to turn the franchise over to new ownership,” Richardson said in a statement released on the Panthers’ website.

“Before I say anything, I take sexual assault extremely serious, but allegations? That’s a different thing,” Newton said, according to the Charlotte Observer. “In this day and time, it’s almost you’re automatically guilty until proven innocent. Rather than, in the rights of the judicial system, you’re supposed to be innocent until proven guilty, so everything I’ve heard were allegations and nothing was actually proven.”

Newton’s response came only a few months after he made a comment to a female reporter saying that women talking about wide receiver routes was “funny.”

With the team for sale, music producer Sean “Diddy” Combs has shown an interest in the team. While this seems like a joke, it’s technically a possibility.

Forbes estimated the Panthers to be worth $2.3 billion. In order to be a controlling owner, a single person must write a minimum check of about $600 million. While that might be just out of Diddy’s range, he is seeking help from others, including Golden State Warriors point guard Steph Curry.

Some more realistic candidates include the likes of Jeff Bezos, Michael Jordan, and the Belk family, which currently owns about five percent of the Panthers organization. Selling the team won’t be an easy task. With declining viewership, an unhappy fan base, and the popularity of other sports right now (e.g. NBA), the NFL might not be the best investment.

Regardless of all the off-the-field drama, the Panthers will play football just the same as they have all season. The sale of the organization won’t change the way the team is run as much as it might change the NFL.

Owners can have a say in hiring decisions, but most on-the-field personnel is decided by the football experts like the coach and general manager. The owner acts more as an ambassador for the team to the NFL as a whole. Owners collectively make decisions about the NFL as a business rather than a sport.

In the end, the dark reality of sexual assault and misconduct in our society has been brought to light in the football world. And if the football world follows the same trend as the rest of the entertainment industry, this likely won’t be the last time fans read a troubling headline.