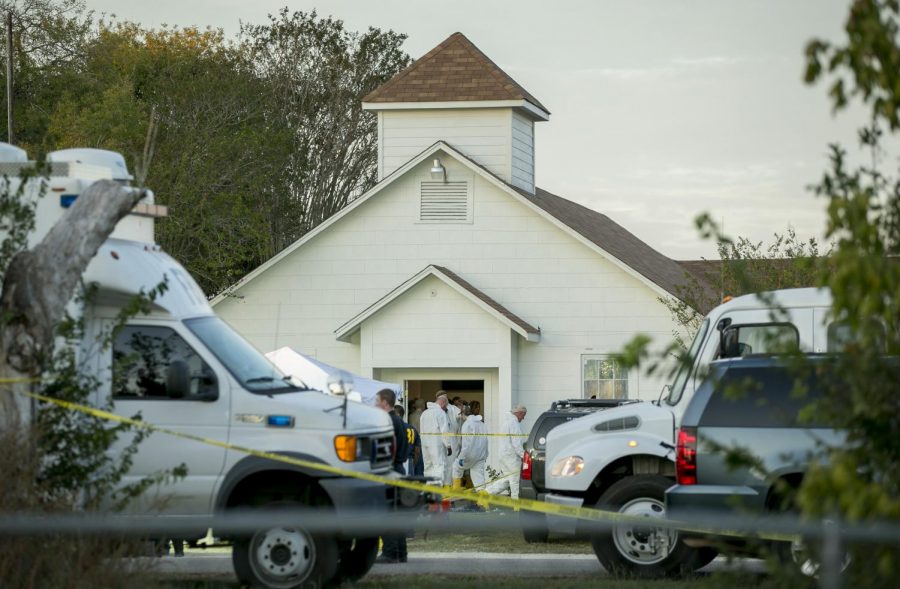 Investigators work at the scene of a mass shooting at the First Baptist Church in Sutherland Springs, Texas on Sunday, Nov. 5, 2017. (Jay Janner/Austin American-Statesman/TNS)

The community of Sutherland Springs, Texas is now the site of the most recent American mass shooting after a gunman opened fire in a Baptist church.

At 11:20 a.m. the gunman, a lone white male wearing black tactical gear and a ballistic vest and wielding an assault rifle, walked across the street from a Valero gas station to the church and began opening fire.

The first news reports of the shooting were between noon and 12:30 p.m.

The victims range in age from 1 to 77 and include Pastor Frank Pomeroy’s 14-year-old daughter, as reported by the family to news outlets.

Among the 26 killed in the rampage, 20 were injured and are at local hospitals. Texas Rangers are interviewing victims and their families for more information, according to a press conference held the evening of Nov. 5.

“May God be w/ the people of Sutherland Springs, Texas. The FBI & law enforcement are on the scene. I am monitoring the situation from Japan,” tweeted President Donald Trump, who was traveling in Asia.

The shooting in Texas was the most deadly in the state’s history, and it comes just weeks after the Las Vegas Strip shooting, which killed 58. Since Las Vegas’s tragedy, many across the nation have called for increased talks on gun control laws.

During the press conference following the shooting, none the officials gave the name of the suspect, but two law enforcement officials speaking under anonymity identified the gunman as Devin Patrick Kelley, 26, a resident of a San Antonio suburb.

One social media post before the attack shows Kelley posting a photo of an AR-15 semiautomatic weapon.

The Pentagon has confirmed that Kelley served in the Air Force and received a Bad Conduct Discharge for assaulting his family. He was court-martialed in 2012 for beating his wife and child, and under current gun control laws, so he should not have been able to legally purchase a gun. However, due to a clerical error by the Air Force, Kelley was not prevented from buying the firearms.

Upon exiting the church, the gunman was engaged by a local resident, who was armed with a rifle. The church gunman then dropped his weapon and fled the scene while the resident gave chase. The gunman was later found dead on the Wilson County line, with multiple weapons in the vehicle.

Officials could not confirm if the gunman’s death was from a self-inflicted gunshot wound or from the armed local resident.

DPS Regional Director Freeman Martin confirmed that the local resident who pursued the gunman was not harmed.

23 victims were found dead inside the church, two were found outside, and the final one died after being taken to the hospital.

No motive for the shooting has been released at this time.

As of the 2000 census, Sutherland Springs’ population numbered around 362. Some estimates have put the population higher as of 2016.

“Our prayers are with all who were harmed by this evil act. Our thanks to law enforcement for their response,” tweeted Governor Greg Abbott.

President Trump later spoke on the situation personally from a televised address in Tokyo.

“In dark times such as these, Americans do we what do best and we pull together. We lock hands and we join arms. Through the tears and through the sadness we stand strong.”

EDITOR’S NOTE: This article was updated Nov. 7, 5:40 p.m. to correct a factual error; the gunman should not have been able to legally own a gun, contrary to a previous version of the article.