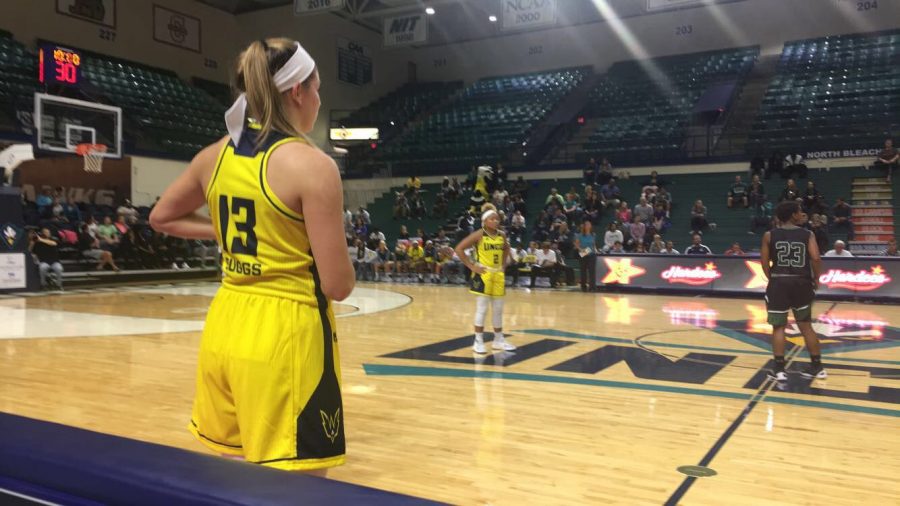 Lacey Suggs (left) prepares to take ball in prior to the second half start.

The UNC Wilmington women’s basketball team has a new lease on life for the 2017-18 season, and fans got to catch their first glimpse of what that might look like in an 81-37 victory over in-state Division III opponent Greensboro College at Trask Coliseum on Sunday afternoon.

The Seahawks, led by new coach Karen Barefoot, played with a notable sense of enthusiasm and zest in front of the Trask crowd. They took control of the game in the second quarter, outscoring the Pride 28-8 in the quarter. The lead would only balloon further, rising to 60-27 after three quarters. It never got closer than the 17-11 score at the end of the first.

Sophomore guard Lacey Suggs added 15 points on 5-of-10 shooting to go along with seven boards and three steals, and sophomore point guard Moriah Crisp chipped in 12 points and four assists.

The Seahawks also saw valuable contributions from senior forward Rebekah Banks (six points and 10 boards) and got considerable help from their reserves who chipped in 26 bench points. UNCW also scored 40 points in the paint – just about half of their total for the game.

Barefoot praised her players’ teamwork in the postgame press conference and believes that this afternoon’s performance is a sign of greater things to come in the upcoming new season.

“Today was a team effort,” Barefoot said. “Everybody was just scrapping, getting after it, trying to push the tempo. We got some transition buckets, everybody was sharing the ball, and we were very aggressive.”

Raque, whose off-ball movement was key to the Seahawks in this game, noted her teammates’ ability to distribute the rock as a big help in her performance, as well as the renewed energy under Barefoot.

“My teammates were looking for me the entire time,” said Raque. “Having them contribute and get me the ball is the main thing they were looking for, but today showed that other people could score the basketball and that was really important for us. Getting back out there and having such a positive attitude was exciting.”

Suggs, who rarely played last season under previous coach Adell Harris, paid homage to Barefoot’s strategic know-how as a cause for her impact this afternoon. She is hoping that her hard work to improve in the offseason will translate to a continued impact this season.

“I’m all about her,” Suggs, who was also named a team co-captain, said of buying into her new coach’s philosophy. “I like what she does and what she preaches; hard work, effort, everyone’s all in for her and you can definitely tell on the court…I’ve worked all summer and throughout the preseason, so I definitely see an improvement.”

Next up for UNCW is their first official game of the regular season in two weeks against in-state DII opponent UNC Pembroke.

Staff Writer Lanre Badmus can be found on Twitter @LonnyBadmon. Any tips or suggestions should be forwarded via email to [email protected] For video updates from The Seahawk, subscribe to our YouTube channel.