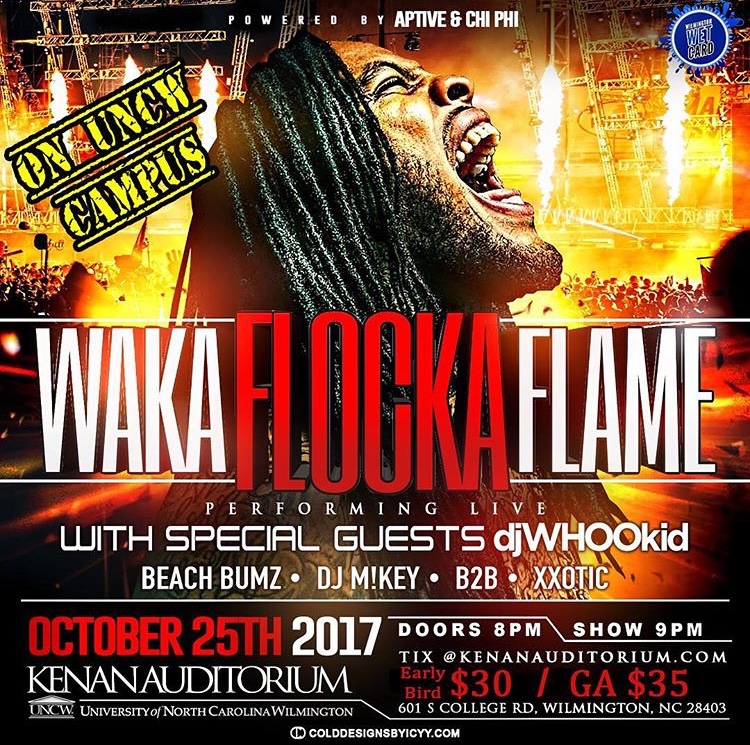 People are left to search for answers after rapper Waka Flocka Flame’s concert was canceled before the rapper’s scheduled performance inside UNC Wilmington’s Kenan Auditorium on Wednesday night.

Earlier this month, it was announced that the rapper was to perform in Wilmington for the first time since 2010 in a show sponsored by UNCW’s Chi Phi fraternity and Aptive, as part of Wilmington Wet Card’s Fall Semester Line-Up.

“When I first heard he was coming, it was refreshing to see a performer from a different type of music than Jesse McCartney,” said UNCW sophomore Dillion Frazier. “Unfortunately, we weren’t able to hear an artist most grew up listening to.”

The opening acts were The Beach Bumz, DJ Mickey and Xxotic. The crowd hoarded around the front of the stage and created a mosh pit that remained for the duration of their performances. The mosh pit became an issue before Waka Flocka was to perform.

Due to safety concerns regarding fire exits and aisles being blocked, announcements were made to ask people to clear the front of the auditorium and return to their seats. According to the UNCW Police Department, “no arrests [were] made last night and there were numerous individuals requested to leave the concert.”

People did not immediately follow those requests, which lead to warnings of cancellation by event staff. Waka Flocka was on stage behind a curtain prepared to go on when the decision to cancel the show was made.

“It seemed to be that the concert would’ve proceeded as scheduled had attendees been more compliant about keeping aisles and exits clear,” said UNCW senior Caleb Mabe. “Despite my disappointment about the cancellation, I am confident that the qualified professionals at UNCW made the right decision if they believed concert-goers safety was at risk.”

The official reason for the cancellation given to the crowd was safety, according to UNCW spokesperson Janine Iamunno.

“In order to ensure the safety of all attendees, performers and staff and to prevent venue damage,” said Iamunno, “after consulting with University Police, event personnel made the decision to stop the event, and patrons were calmly but quickly ushered from the auditorium without incident.”

After the concert, questions arose regarding how the mosh pit could have been prevented by barricading the front of the stage or installing extra security. However, safety only became an issue mid-concert (before Waka Flocka was to perform) according to Wilmington Wet Card’s Instagram account.

“During our walkthrough, we were told that patrons would be able to be at the stage — we were probably equipped to do so but did not deem necessary, from what we were told by management,” said Wilmington Wet Card via Instagram. “Mid show they changed things up on us and deemed it a fire and safety hazard.”

Some students objected to the cancellation. They cited paying for tickets to see Waka Flocka but receiving lesser-known artists. Had Waka Flocka not been advertised, it is unlikely the turnout would have been the same.

“I definitely would not have gone if it wasn’t for Waka,” said sophomore Hunter Wilkinson. “The Beach Bumz were alright, but I grew up listening to No Hands and Grove St. Party, so I was looking forward to him performing those songs. I paid to see Waka, which left me extremely disappointed when they canceled the show. I felt like I had wasted my money and time.”

Some have called for refunds from the event, which UNCW has offered despite not sponsoring or presenting the concert.

“UNCW regrets that the performance had to be stopped,” said Iamunno. “and is offering attendees the opportunity to exchange their purchased tickets for tickets of an equal or lesser value for an upcoming ‘UNCW Presents’ event.”