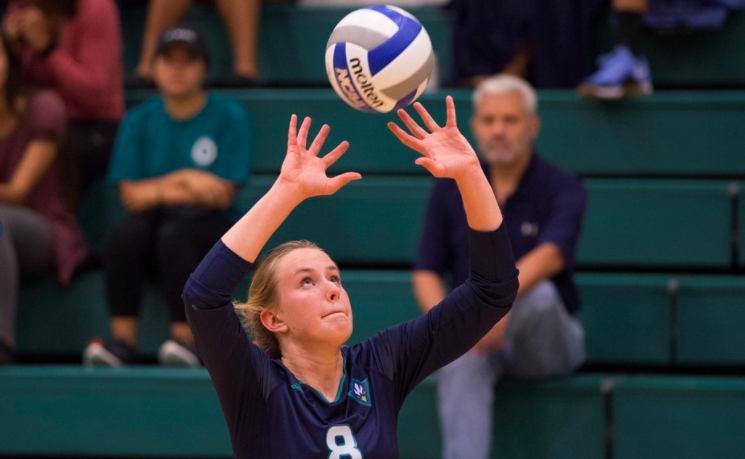 UNCW's Brynn Montgomery sets up a kill in the Seahawks' 3-0 win over Northeastern on Thursday.

Home for the first time in nearly two weeks, UNC Wilmington played host to Northeastern, a team which, prior to Thursday’s match, was undefeated in CAA play.

The Seahawks walked into Hanover Hall the clear underdog but did not let this season’s shortcomings stop them from going toe-to-toe with the number one team in the conference. The Seahawks would sweep Northeastern in three sets, 28-26, 26-24, 25-20, snapping the Huskies’ 10-game winning streak and giving them their first CAA loss.

UNCW (8-13, 2-7 CAA) was led by sophomore middle blocker Kendall Bender’s 11 kills and a .647 hitting percentage. She was followed closely by middle hitter Sydney Brock, whose 10 kills helped the Seahawks outpace the Huskies (15-7, 8-1).

Defensive improvement, as it has been all season, was a major focus following tonight’s match for UNCW coach Amy Bambenek.

“We’ve been deficient in our digs,” said Bambenek. “Teams have been out-digging us … so we’ve been working on our defensive movement and how to be able to be reactive.”

Resilience was a word used by Bambenek to describe her team in tonight’s match.

“I think it shows a lot of resilience. Not many teams, I think, across the country can go 1-7 to start their conference play, and be able to come back in that second opportunity to play our opponents,” said Bambenek.

There was a noticeable increase in hustle from UNCW in tonight’s match, which seems to have been the missing ingredient in recent losses for the Seahawks. Bambenek said hustle is a key component for the Seahawks as they transition into the last few games of the regular season.

“That hustle, it just has to be there. It shows that you’re still willing to fight,” said Bambenek.

The Seahawks will remain at home this weekend as they welcome James Madison for a Saturday afternoon match at 3 p.m.

Contributing Writer Noah Powers can be found on Twitter at @TealNoah23. Any tips or suggestions should be forwarded via email to [email protected] For video updates from The Seahawk, subscribe to our YouTube channel.