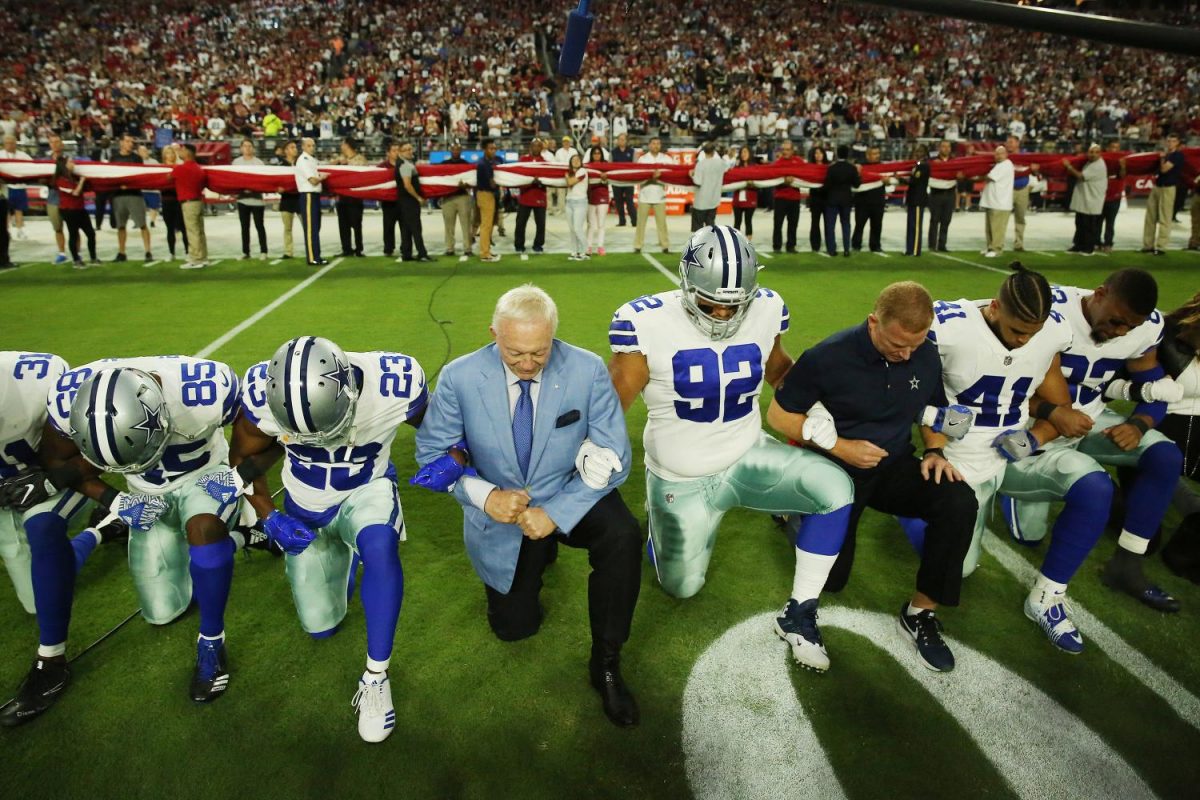 Dallas Cowboys players and staff including owner Jerry Jones and head coach Jason Garrett all take a knee before the singing of the National Anthem prior to the start of a game against the Arizona Cardinals at University of Phoenix Stadium Monday, Sept. 25, 2017 in Glendale, Ariz.

Editor’s note: The following is part of a weekly column by NFL writer Brent Jansen. All views and opinions expressed in this story are strictly those of the author and do not reflect those of The Seahawk editorial staff.

The playing of the national anthem has been a tradition at sporting events since the late-1800s. At Little League games, high school events, and at the college professional levels, the Star-Spangled Banner plays and all players and fans follow the instructions of the announcer: Please rise and remove your hats for the singing of our national anthem.

Starting last year, former San Francisco 49ers quarterback Colin Kaepernick sat during the pre-game ritual. Kaepernick first sat on Aug. 14 and Aug. 20, 2016, but seemingly went unnoticed until the following week. He had the following to say after the game:
“I am not going to stand up to show pride in a flag for a country that oppresses black people and people of color. To me, this is bigger than football and it would be selfish on my part to look the other way. There are bodies in the street and people getting paid leave and getting away with murder” – Colin Kaepernick, post-game on Aug. 26, 2016
The next week, Kaepernick kneeled during the anthem and was joined by fellow teammate Eric Reid. From then on, the 29-year-old quarterback gained support from players across the NFL, with players from many teams taking a knee. The protests during the anthem brought awareness to oppression and police brutality, taking many forms: kneeling, linking arms, putting a fist in the air, etc.

Last weekend on Twitter, President Donald Trump called NFL players “sons of bitches” for not standing during the playing of the anthem. This was followed by a series of tweets poking fun of the NFL’s ratings. The first game day following the president’s comments, on Sept. 24, most teams in the League had at least a few players stage a protest.

The Baltimore Ravens and Jacksonville Jaguars knelt together during the Star-Spangled Banner, then stood for the United Kingdom’s national anthem, “God Save the Queen,” in one of the NFL’s annual games played in London.

The Pittsburgh Steelers remained in the tunnel during the anthem, with the exception of former Army Ranger and Steelers offensive lineman Alejandro Villanueva, who stood at the entrance of the tunnel.

The Tennessee Titans and Seattle Seahawks also remained off the field during the playing of the national anthem. There were even performers of the anthem who knelt while they sang.

The protests have led to backlash in the sports community. Many fans have burned jerseys, destroyed tickets and removed memorabilia from their homes. The large part of fans’ displeasure comes from the respect they believe the national anthem pays to the United States military. Fans claimed that kneeling during the anthem disrespects the men and women who died fighting for our country.

The origin of these protests stems from the oppression many minorities face in this country. Today, the protests have become something entirely different. The mass protests that took place in the NFL this past week seem to take a stance against Trump’s comments rather than a fight against oppression. This is due to the fact the discussion emerging from these protests isn’t focused on racism and discrimination, but rather the morality of kneeling during our country’s national anthem and the president’s comments.
“After I heard the President’s comments — and just the difference in characterization he had for my fellow peers taking a silent protest, in comparison to the way he characterized people that were preaching hate — it really struck me.” – Julius Thomas, Miami Dolphins tight end, to CNN’s Erin Burnett on Monday
The headlines today read, “Trump’s ‘SOB’ remark moves NFL player to kneel during anthem” (CNN) and “Donald Trump calls for NFL to create rule mandating players stand for national anthem” (USA Today). Racism, oppression, discrimination or hate speech is rarely mentioned throughout these articles.

The protests today have become a show of strength in freedom of speech. That being said, many NFL players might still be kneeling to raise awareness for the very real issue of discrimination and hate. But the media has taken these very real intentions and turned it into something completely separate.

Columnist Brent Jansen can be found on Twitter @BrentJans. Any tips or suggestions should be forwarded via email to [email protected]