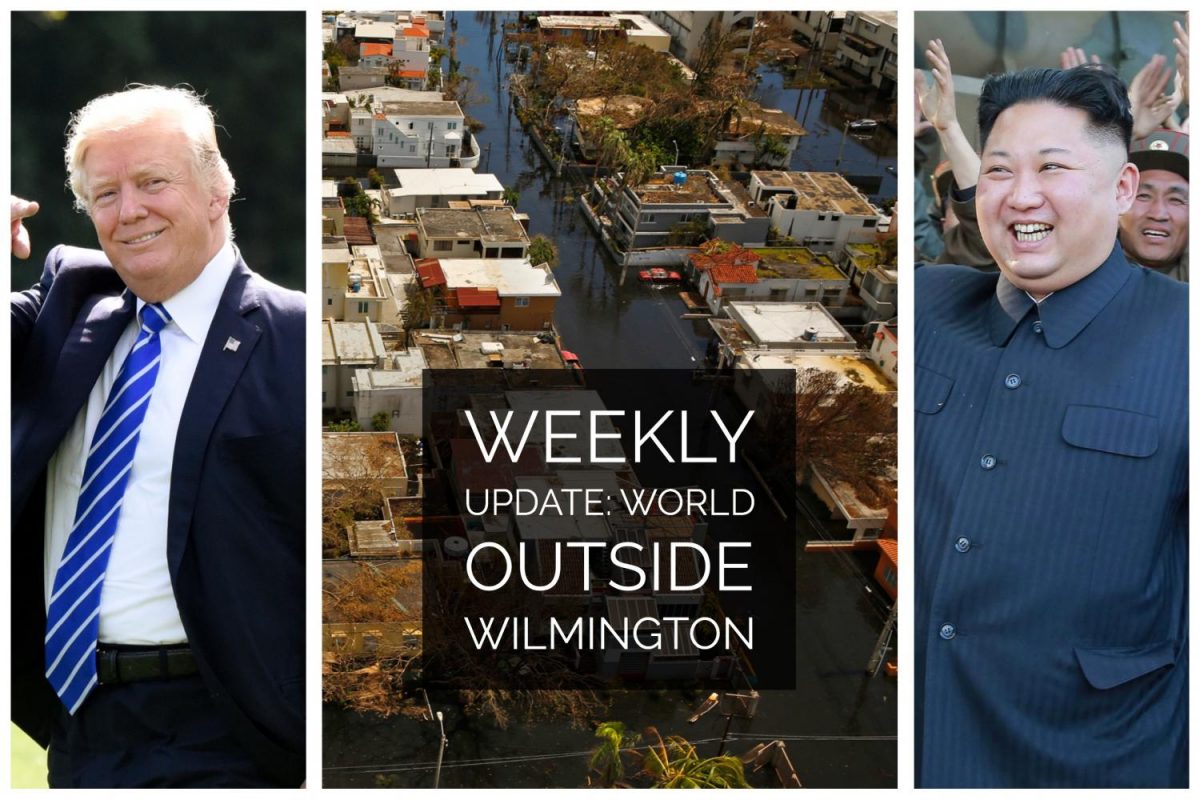 Collage by Hannah Williams | The Seahawk

Kim Jong-un vs. Trump
In the latest war of words between North Korean leader Kim Jong-un and United States President Donald Trump, the former issued a direct statement regarding the latter following President Trump’s speech at the United Nations on Sept. 19, 2017.

The statement from Kim Jong-un referred to President Trump a “mentally deranged U.S. dotard,” vowing the “highest level of hard-line countermeasure in history,” and claimed that President Trump had insulted his nation and his people’s honor.

“Just heard Foreign Minister of North Korea speak at U.N. If he echoes thoughts of Little Rocket Man, they won’t be around much longer!” the tweet read.

“Last weekend, Trump claimed that our leadership wouldn’t be around much longer and he declared a war on our country,” Ri stated. “Even the fact that this comes from someone who is currently holding the seat of the U.S. presidency is clearly a declaration of war.”

“Since the U.S. declared war on our country, we will have every right to make countermeasures, including the right to shoot down the U.S. bombers even when they are not yet inside the airspace border of our country.”

The events unfolding are the latest in a string of provocative measures from North Korea, including the firing of two missiles over the Japanese archipelago, the first on Aug. 29, the second on Sept. 15. Most recently, the North Korean government threatened to test a hydrogen bomb over the Pacific Ocean.

“We have not declared war on North Korea, and frankly the suggestion of that is absurd,” said White House Press Secretary Sarah Huckabee Sanders in a statement later on Monday regarding Minister Ri’s accusations. “It’s never appropriate for a country to shoot down another country’s aircraft when it’s over international waters.”

On Tuesday, the United States increased sanctions on North Korea, with President Trump warning of a “devastating” military option toward North Korea, if necessary.

Arrests following London tube bombing
Following the attack at London’s Parsons Green tube station on Sept. 15, 2017, a seventh perpetrator was arrested during the early hours of Monday morning, according to British police and the BBC.

The 20-year-old was arrested under section 41 of the Terrorism Act, which states that a person may be arrested by a constable without warrant, should the constable reasonably suspect that the person is a terrorist.

Arrested in Cardiff, Wales, the 20-year-old is now being held at a police station in south London.

The Parsons Green tube bombing was carried out during rush hour at a station that averages 6.75 million passengers boarding a year. 30 people were injured in the explosion, though none have been confirmed killed as of Sept. 25, 2017.

Metropolitan Police have been treating the incident as a terrorist attack, which is the fifth major terrorist attack in Britain in recent months, following the Westminster attack, the Manchester bombing, the London Bridge attack and the Finsbury Park attack.

London Mayor Sadiq Khan said Sunday that seven terrorist plots have been thwarted in the city since March.

Of the seven arrested in connection with the Parsons Green tube bombing, three have been released, one has been charged, and three remain in the custody of authorities.

Myanmar “ethnic cleansing”
The Rohingya persecution in Myanmar continues in what has been called “textbook ethnic cleansing” by the UN, leaving nearly 400,000 Rohingya people to flee across the border to Bangladesh in just one month. Up to 1,000 are dead.

The refugee crisis has led to massive refugee camps being erected in Bangladesh.

The nearly one million Rohingya, who have been called “the world’s most persecuted minority,” are predominantly Muslim. They have been living for centuries in Myanmar, a nation that is predominantly Buddhist. Since 1982, the Rohingya people have been denied citizenship, which has left the ethnic group stateless. 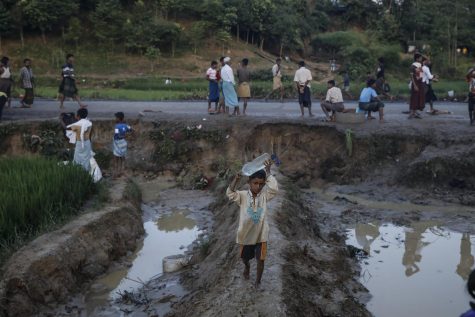 The majority of the Rohingya people hail from the Myanmar state of Rakhine, which is on the western coastline, bordering Bangladesh. Over the past few decades, many Rohingya have fled Myanmar to other nations either via land or boat.

In August, entire Rohingya villages were torched to the ground by Myanmar security forces and mobs consisting primarily of vigilantes. Some villages were still being burned as of Sept. 22.

The recent persecution of the Rohingya has drawn international attention, even from the Vatican, for which Pope Francis stated that he was “praying that they [the Rohingya] would receive full rights.”

Myanmar State Chancellor Aung San Suu Kyi has shied away from speaking on the situation.

The Rohingya people have been in an ongoing insurgency against Myanmar government forces since 1947.

During a U.N. Security Council meeting on Sept. 20, U.S. Vice President Mike Pence stated that President Trump encouraged “strong and swift” U.N. action in an effort to end the Rohingya crisis in the region.

strained in the near-future. Merkel regularly spars with President Trump over issues such as the climate, trade and refugees.

During the election cycle, a surge of right-wing voters had worried many mainstream Germans before election-day was upon them, according to reports from German media outlets. However, Merkel won for a fourth consecutive time over the right and secured another four-year term as the leader of the EU’s most powerful nation.

However, for the first time since World War II, a far-right, nationalist party known as Alternative for Germany managed to enter the German Parliament, securing a small victory despite losing the federal election.

Merkel vowed to win back the right-wing nationalist voters before the next German election in 2021.

Disaster in the Caribbean following successive hurricanes
Following the catastrophic damage left behind by Hurricanes Irma, Jose and Maria, the Caribbean begins the slow process of rebuilding.

Puerto Rico, an island of 3.4 million people, has been left stranded from the grid and isolated in the middle of the sea, with officials estimating power restoration within four to six months.

But on an island with currently little access to water and dwindling food supplies, panic is starting to spread amongst the populace. Near “apocalyptic” devastation has been reported on the island nation, with a possible dam breach in the near future looking to cause even more damage.

To the east, the island of Barbuda has been left virtually uninhabitable following Hurricane Irma. For the first time in 300 years, Barbuda has no registered inhabitants after its population evacuated to the nearby island of Antigua following warnings regarding Hurricane Jose.

South of Barbuda, on the island of Dominica, ruin lay across the landscape, showing the results of the landfall of Category 5 Hurricane Maria on Sept. 19. Nearly 90 percent of the structures on Dominica were damaged, and the island’s primary hospital, Princess Margaret Hospital, was left devastated, according to a report from NBC News.

It is estimated that the recovery in the Caribbean will take years.

The British Red Cross, Unicef, Save The Children, GoFundMe and Global Going have all been accepting donations to support the hurricane-ravaged Caribbean.

Mexico earthquake leaves hundreds dead
Crews continue to search for victims in Mexico City after a massive 7.1 earthquake rattled the center of the country on Sept. 19, 2017.

So far, 326 have been reported dead across the country, with 40 to 50 still missing. Many bodies were found Monday morning in the ruins of an office building in one Mexico City neighborhood.

The major earthquake comes on the heels of another more powerful quake that shook Mexico on Sept. 7. That earthquake took the lives of 96 people and registered as an 8.2 on the Richter scale.

Many schools across Mexico City remain closed as the people come to terms with the disaster and work to recover. A search-and-rescue team from the Los Angeles Fire Department was dispatched to the city to assist in relief efforts. U.S. President Donald Trump offered his condolences to the Mexican people on Sept. 19.

Two smaller earthquakes struck the Mexican state of Oaxaca on Saturday and registered 4.5 and 6.1 respectively, adding to the already disastrous ongoing situation.