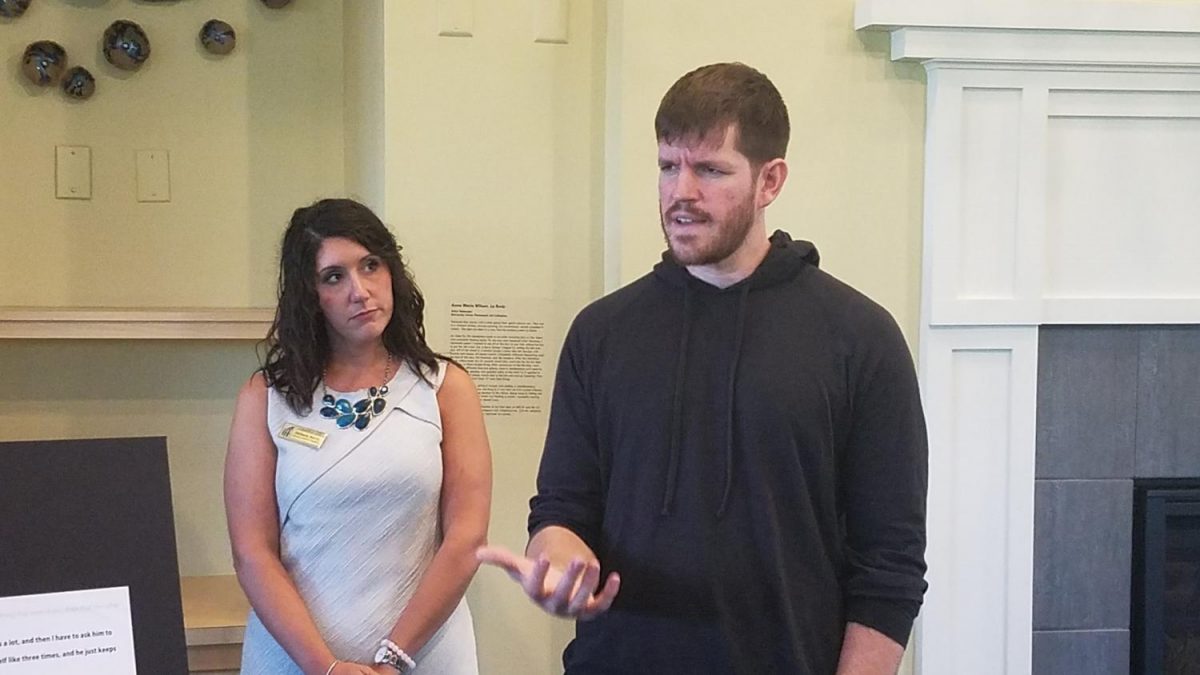 Director of Campus Life Arts and Programs Stefanie Norris, left, looks on as Brandon Stanton, creator of "Humans of New York," addresses those gathered at a reception prior to his lecture in UNC Wilmington's Burney Center on Tuesday, Sept. 27.

Too many people say they are “following their dreams” as an excuse to not work when, in reality, following one’s dreams is a full-time job, said the creator of the internet photo blog “Humans of New York” (HONY) on Tuesday in UNC Wilmington’s Burney Center.

Brandon Stanton, who started HONY in 2010 after losing his job and moving to New York City to pursue his passion for photography, has amassed a following of more than 20 million people across multiple social media platforms, his website and a series of books of the same name. The blog spotlights strangers Stanton has met in cities around the world. Each post shows a portrait by the 33-year-old photographer and an excerpt from the conversation he shares with the featured person.

“At some point, it stopped being a photography blog and started being what it is today,” Stanton said. “Humans of New York is creating a bubble on the street with a random person and, in a very short time, establishing a rapport making them comfortable enough to where they will share things about their lives that they might not share with anybody else.”

Stanton’s speech was part of an ongoing lecture series UNCW Campus Life will host throughout the school year. The series focuses on how students can better communicate and continue the conversation regarding current social issues.

Stefanie Norris, director of Campus Life Arts and Programs and an organizer of the event, said Stanton’s lecture was a way to present a different way of communicating – through making stories personal, and telling these stories through non-traditional mediums like HONY.

“We get our information from social media, we get it from blogs,” she said. “I think it really speaks to where conversations are happening and I think Brandon does it in a way that is really powerful.”

Despite his success and a short career that has taken him across the United States, Europe, Africa and countries in the Middle East, Stanton said he still needs to remind himself from time to time of the terror he felt when he first started photographing people.

The first photo he took of strangers, he said, featured two young boys with their mothers on a subway in New York City. The boys, complete strangers to one another, stood together and held the same expression on their faces as they stared up at something off-screen.

The photo became the first post in what would become the Humans of New York page on Facebook.

“When I took that photo … I was looking for a way to make it as a photographer,” Stanton said. “I realized that I had a path … If I focused on photographing people and, more specifically, interacting with people and getting over that fear of approaching a stranger, then maybe I could become one of the best in the world at taking portraits of people.”

The third entry in the HONY book series released in 2015 – a compilation of the thousands of pictures and interviews Stanton has collected over the years. Stanton collaborated more recently with Facebook to create one the social media website’s first original series titled “Humans of New York: The Series,” of which five episodes have been released. The series focuses on people from all walks of life telling stories related to the main theme of each episode, including home, relationships and purpose.

Sports Editor Noah Thomas can be found on Twitter @iNoahT. Any tips or suggestions should be forwarded via email to njt8879@uncw.edu.