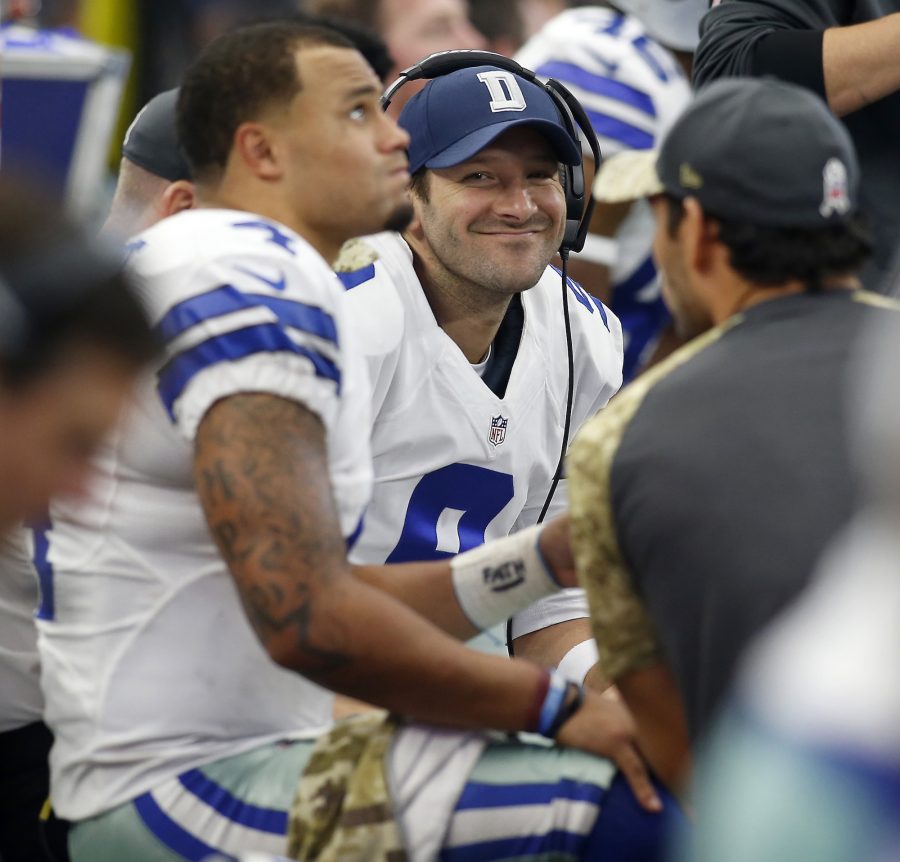 Dallas Cowboys quarterback Tony Romo (9) smiles as he talks with quarterback Dak Prescott (4) on the bench in the second half of a game against the Baltimore Ravens on Sunday, Nov. 20, 2016 at AT&T Stadium in Arlington, Texas. The Cowboys won 27-17. (Brad Loper/Fort Worth Star-Telegram/TNS)

After a dramatic offseason, Tony Romo has decided to retire from professional football for health reasons. His next venture? Broadcasting.

Romo is expected to join Jim Nantz on CBS as a color commentator, according to ESPN’s Adam Schefter. Fox and NBC also showed interest in the veteran quarterback, but Romo has ultimately decided to replace Phil Simms in the CBS booth.

Romo gained a lot of media attention this offseason with an almost certain departure from the Dallas Cowboys, where he has played his entire career. With the recent rise of Dak Prescott, the injury-prone Romo became nothing more than an expensive back-up.

While the Broncos and Texans both showed interest in the nearly 37-year old veteran, Romo decided that it be best for his health to call it a career. Romo only played in five total games in his last two seasons due to a collarbone and back injury.

So what does Romo’s retirement mean for the NFL?

Nothing, really. Romo will go down in history as an injury-prone and an interception-throwing gunslinger who’s potential was overshadowed by the better quarterbacks of the time. On top of that, Romo’s media popularity was either stolen by Terrell Owens during the latter’s stint in Dallas or focused on the negative aspects of his career.

Romo retiring changes very little for the upcoming season. The Cowboys have clearly moved on to a younger and more athletic Dak Prescott. The only real possibility would be if Romo had gone to Denver and rode their stellar defense to the playoffs, similar to what Peyton Manning did by signing with the Broncos in 2012. The only difference is that Peyton Manning was one of the greatest quarterbacks of all time, and Romo simply is not.

That being said, Tony Romo was a great quarterback. But he isn’t one of the greats. One could even say that he is elite. But having an argument be made that you are elite does not automatically classify greatness (just ask Joe Flacco).

Regardless, Tony Romo will likely make his way into the Hall of Fame and join the Cowboy’s Ring of Honor as the most prolific quarterback in Cowboy’s history.