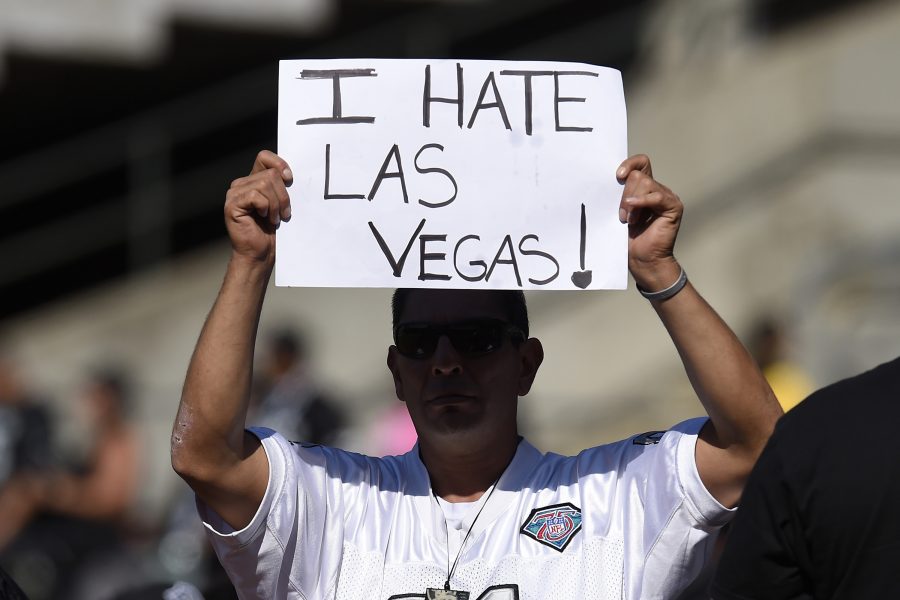 An Oakland Raiders fan shows his displeasure about the team possibly moving to Las Vegas during their preseason game against the Tennessee Titans at the Coliseum on Saturday, Aug. 27, 2016 in Oakland, Calif. (Jose Carlos Fajardo/Bay Area News Group/TNS)

After a 31-1 vote this past week, NFL owners have approved the Oakland Raiders’ move to Las Vegas.

The road to Vegas has been a long one for the Raiders, dating back to January 2016 when they lost the chance to move to Los Angeles. Unfortunately, the journey isn’t over for the organization.

A main reason for the move was the need for a new stadium. The Oakland-Alameda County Coliseum, which is shared between the Oakland Raiders and the Oakland Athletics, has been open for over 50 years

The planned stadium will seat 65,000 fans and is expected to cost $1.9 billion. But until the stadium gets built, which is projected to open in 2020, the Raiders will have to continue playing at Oakland-Alameda County Coliseum.

Raiders owner Mark Davis had claimed he wanted to stay in Oakland, proposing a plan to tear down the current coliseum in order to build two new stadiums for both the Raiders and Athletics, but since the Athletics still hold a long-term lease on the stadium and neither the city of Oakland nor the Athletics made any major movement towards building a new stadium, the Raiders took their business elsewhere.

The next major leap was finding enough funding to build the new stadium. Davis and the Raiders had already offered up $500 million. Then, after Davis took a business trip to Vegas, Sheldon Adelson, CEO of Las Vegas Sands, the largest casino company in America (according to Forbes), promised $650 million towards the stadium. The pledge from Adelson, on top of Nevada’s approved $750 million tax plan, the stadium was on track to be built.

Six months later, Adelson retracted his $650 million offer, claiming that the Raiders “want so much.” NFL Commissioner Roger Goodell called this a good thing, seeing that Adelson was looking at a path to ownership of the organization and that there shouldn’t be an “ownership position in a team from a casino.”

Luckily, Bank of America filled the $650 million void left by Adelson, and Goodell gave the Raiders the go-ahead to finish their journey to Vegas.

The move hasn’t come without controversy. There is an NFL rule in place stating that NFL referees aren’t allowed to visit Las Vegas during the preseason, regular season, or post season. The reasons behind this being that referees can hold a large part in the outcome of a game and gambling on that game would be immoral and illegal. But if a team calls Vegas home, then the NFL will have to change these rules.

Another area of controversy surrounds the young players exiting college and going straight to Las Vegas. New York Giants wide receiver Brandon Marshall was the only player invited to the annual league meeting of NFL owners and Marshall used this opportunity to express his concerns.

Marshall described Vegas as a “tough place for a kid coming out of college,” especially seeing that some of these young players are suddenly making over a million dollars a year.

While the move to Las Vegas has been a long process for owner Mark Davis, it has also been hard on the fans in Oakland, who will have to see their team play in Oakland for at least another two years. But for the second time in the team’s history, the Raiders are moving out of the East Bay with their eyes on something greater.